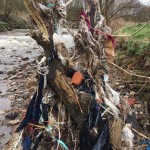 After the dramatic and often devastating flood of last winter, communities are slowly returning to normal but what about the riverbanks?  Here in Rossendale, Lancashire we suffered badly with the River Irwell, only 4 miles from its source, decorating trees and shrubs with dead vegetation and that scourge of our waterways – polythene. 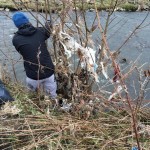 Our feeling was that we really needed to cut off at least some of the branches and try and remove the detritus from the rest.  We tried extended length loppers but the weight was a problem as we tended to be reaching out horizontally, rather than vertically.

With a bit of online research we found the Wolf Garten Multi Change range of equipment.  We bought a 4m extending handle, a pruning saw, branch hook and mini cultivator for 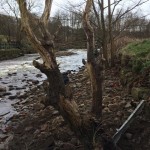 less than £100 and took the whole lot on trial for a couple of hours in the rain!  Enormously successful but it’s a long process that is best undertaken when there’s minimal wind to blow away the plastic bag you so carefully retrieved! 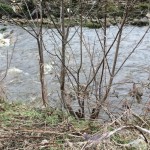 Whilst we’re investigating this however, a local couple and their 10 year old daughter spent Easter clearing another stretch of the river and collected 27 bags of rubbish!  The pictures tell their own story.

This entry was posted on Friday, April 22nd, 2016 at 12:03 pm and is filed under all posts. You can follow any comments to this entry through the RSS 2.0 feed. You can leave a comment, or trackback from your own site.